To have a blast on your visit to Kyoto, you do not have to spend a lot of money on touring or sightseeing. The city is home to several top notch historical and cultural attractions that are open to the public for free or a small fee.

1. Hike up the Fushimi Inari Taisha.

Popular for its several thousand torii gates, the Fushimi Inari Taisha is a Shinto shrine dedicated to the deity Inari. It is found at the foot of Mount Inari, and offers a network of hiking trails leading to the summit.

Approximately four kilometres long, the climb up through the woods, passing through many smaller shrines, takes about two hours. The trails are accessible for free and open 24 hours, so plan your trek early in the morning or at night to avoid the crowds. Make sure to wear good quality footwear, as walking on stone and concrete steps for hours may cause serious foot pains and injuries. Also bring at least one small bottle of water to keep yourself hydrated, and just buy from the vending machines along the trails once you run out of something to drink.

The shrine is a stone’s throw away from Inari Station, which is a five-minute train ride on the JR Nara Line from Kyoto Station (which is included in your JR Rail Pass). 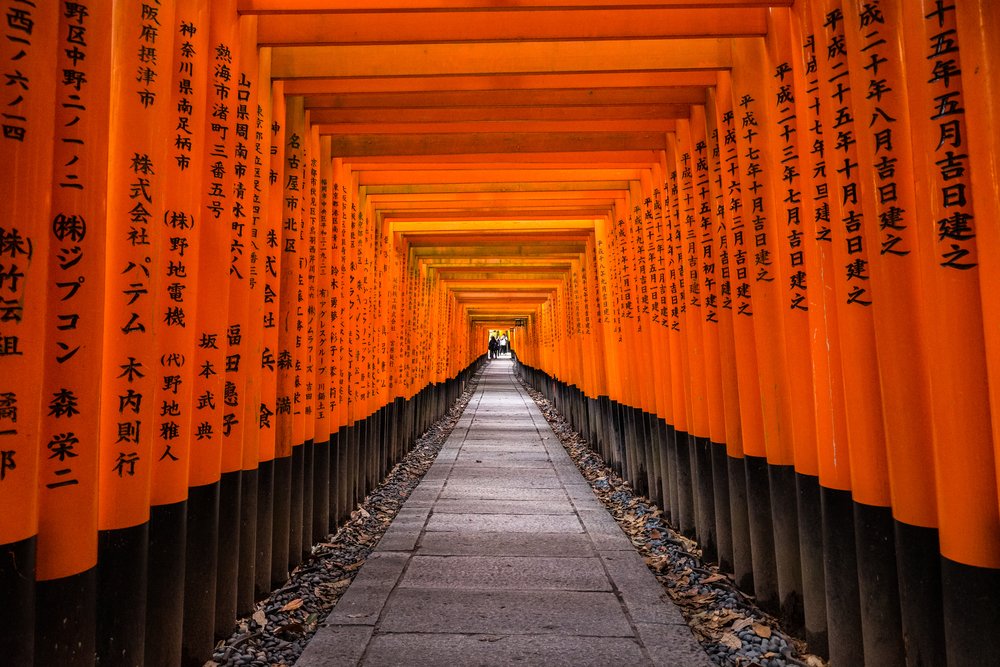 2. Spend a day in Arashiyama

Tucked on the outskirts of western Kyoto, Arashiyama is an attractive district with an abundance of beautiful natural scenery. It is most particularly stunning during peak sakura and autumn seasons, when the bright colours of the flowers and leaves envelop the surroundings.

All over Arashiyama, you can find ancient temples, well-preserved Meiji period roads and houses, and various other centuries-old structures. It is also known for the Bamboo Groves, which offers a pleasant route for hiking or biking; the Monkey Park Iwatayama, which inhabits more than one hundred freely roaming monkeys; and the Togetsukyo Bridge, which is Arashiyama’s most important landmark originally constructed during the Heian period. It also has numerous shops where you can purchase locally made crafts and souvenirs, and restaurants that offer delicious traditional Japanese cuisine. 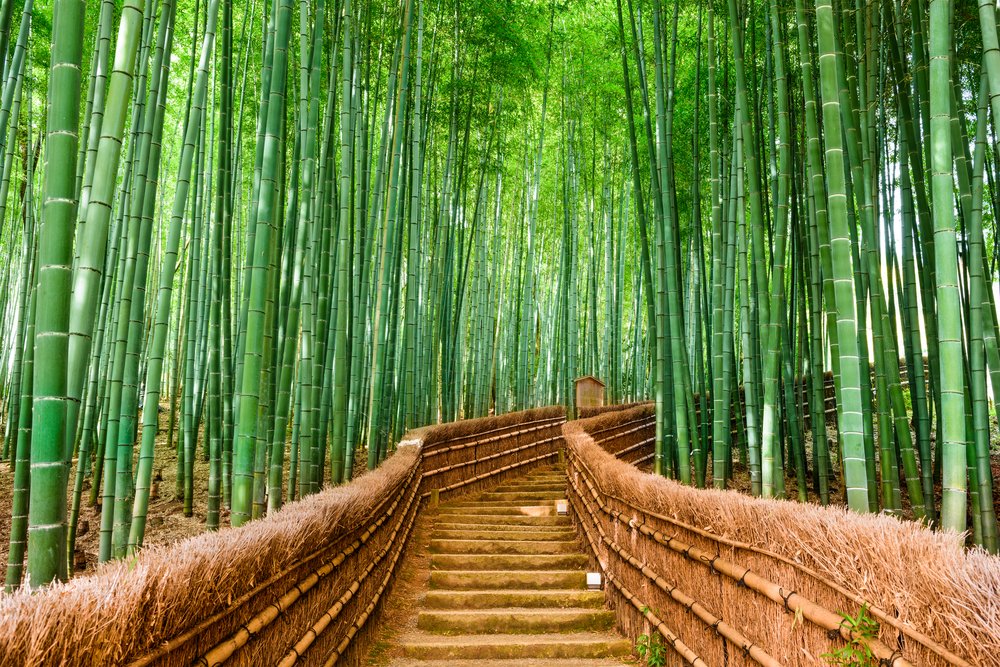 To get there from Kyoto Station, take the JR Sagano Line to Saga-Arashiyama Station.

The official residence of the Japanese Imperial Family up until the Meiji Restoration, the Kyoto Imperial Palace is a large palace complex, measuring 1,300 meters in length and 700 metres in width, made up of several buildings, halls, walls, gates, and gardens.

Unlike before, people can now enter the palace grounds without making reservations in advance. They can simply show up any time during the opening hours and enter for free. However, people are not permitted to enter the buildings, and can only explore the grounds and view the rooms from the outside.

The Kyoto Imperial Palace is easily accessible via the city’s subway network. Take the Karasuma Subway line from Kyoto Station to either Marutamachi Station or Imadegawa Station, and then walk a few minutes to the entrance gate.

4. Stroll along the Philosopher’s Path

Stretching about two kilometres between Ginkaku-ji (or Silver Pavilion) and Nanzen-ji, the Philosopher’s Path is a pedestrian walkway along a canal lined with cherry trees. It got its name from stories that Nishida Kitaro, a respected and renowned 20th century philosopher and professor at Kyoto University, spent time every day walking along the path to meditate.

Considered to be one of Kyoto’s best sakura viewing spots, and completely free of charge, it typically takes about half an hour to go from one end of the path to the other, or longer, if you make a few stops to rest or take pictures, or check out some of the temples nearby. If you get hungry while walking, there are many restaurants, cafes, and food stalls along the way. There are also shops and boutiques where you can find handmade products and other souvenirs.

People usually start their walk at the Ginkaku-ji end of the path. To get there from Kyoto Station, you can take bus number 5, 17, or 100.

Alternatively, if you choose to begin your walk around the Nanzen-ji neighbourhood, you can take the subway from Kyoto Station to Karasuma-Oike Station, and then transfer to the Tozai line to Keage Station. By bus, it is a 35-minute ride from Kyoto Station to Nanzenji-Eikando-michi bus stop. Nanzen-ji is located about a five- to ten-minute walk more. 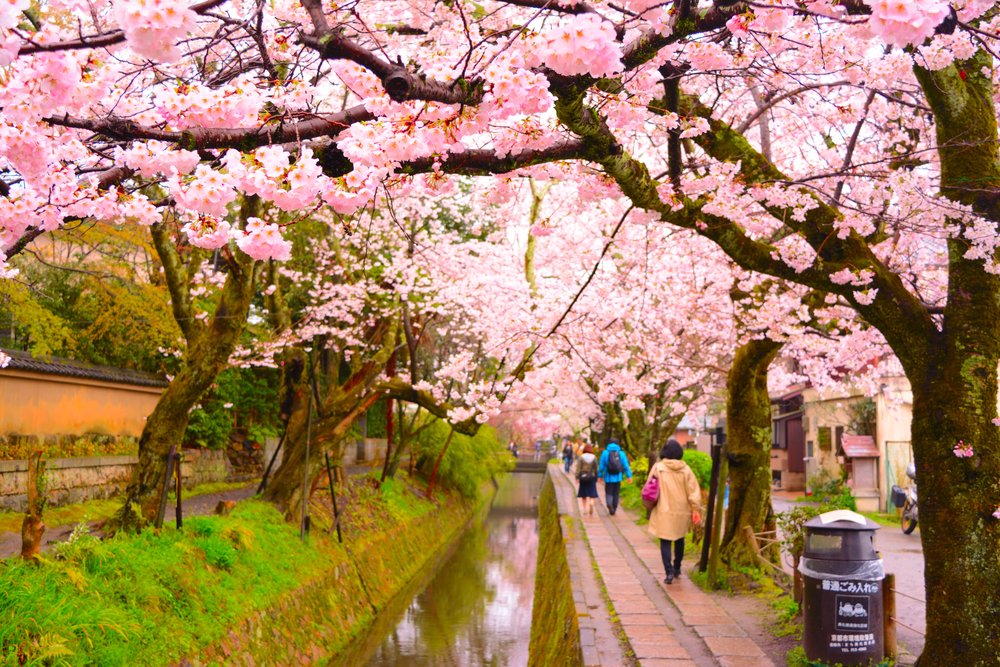 Gion is one of Japan’s most famous geisha districts. It is located in eastern Kyoto, and offers many teahouses where visitors can enjoy authentic Japanese tea while listening to some traditional music or being entertained by musical and dance performances by geiko (the term for geisha in Kyoto) and maiko (the term used to refer to apprentice geisha).

It also has many different modern day options for drinking, dining, and entertainment establishments, such as clubs, bars, restaurants, and pachinko. Every July, Gion’s Yasaka Shrine hosts the Gion Matsuri, which is Japan’s most popular festival.

At Kyoto Station, catch either bus number 100 or number 206 to get to Gion. 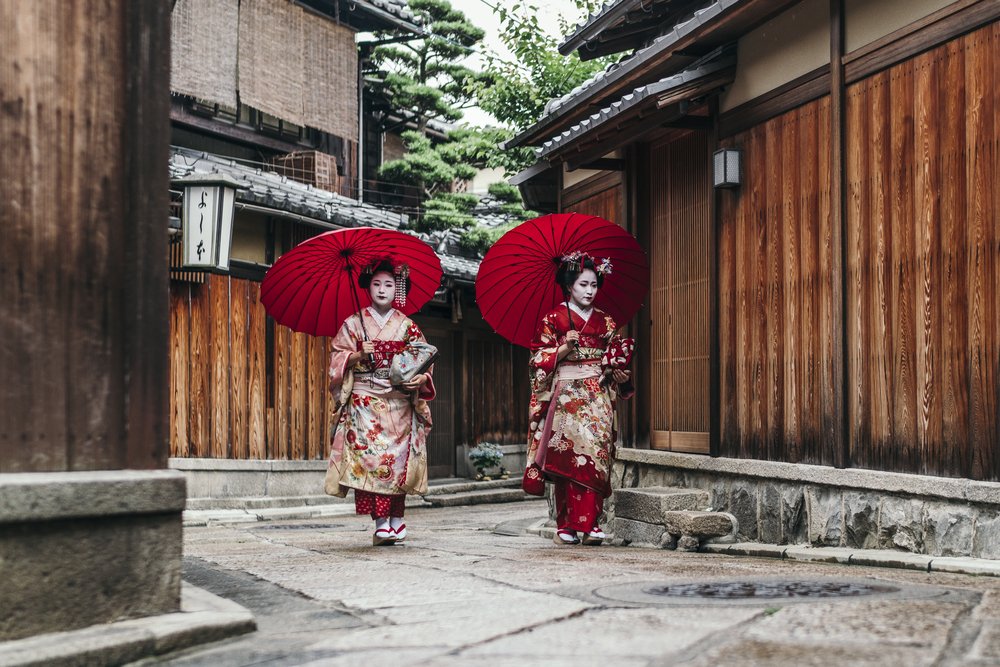 An annual event celebrated for the whole month of July, Gion Matsuri is a fun and vibrant spectacle that features processions of large, lavishly decorated floats; and a mikoshi procession departing from Yasaka Shrine and concluding at the Otabisho.

For three nights before the major parade, the streets of downtown Kyoto are closed down from vehicle traffic. They turn into a bustling and lively area, lined with numerous street vendors and stalls that offer a wide selection of local specialties, such as okonomiyaki, taiyaki, yakitori, and takoyaki. Many women and girls, whether locals or tourists, see this as an excellent opportunity to wear yukata and carry paper fans and traditional Japanese purses while checking out the festivities.

Some homes also open their doors to the public to showcase their valuable family possessions and heirlooms, a traditional custom called Folding Screen Festival or Byobu Matsuri.

The main festival venue is accessible from Kyoto Station by bus number 100 or 206. 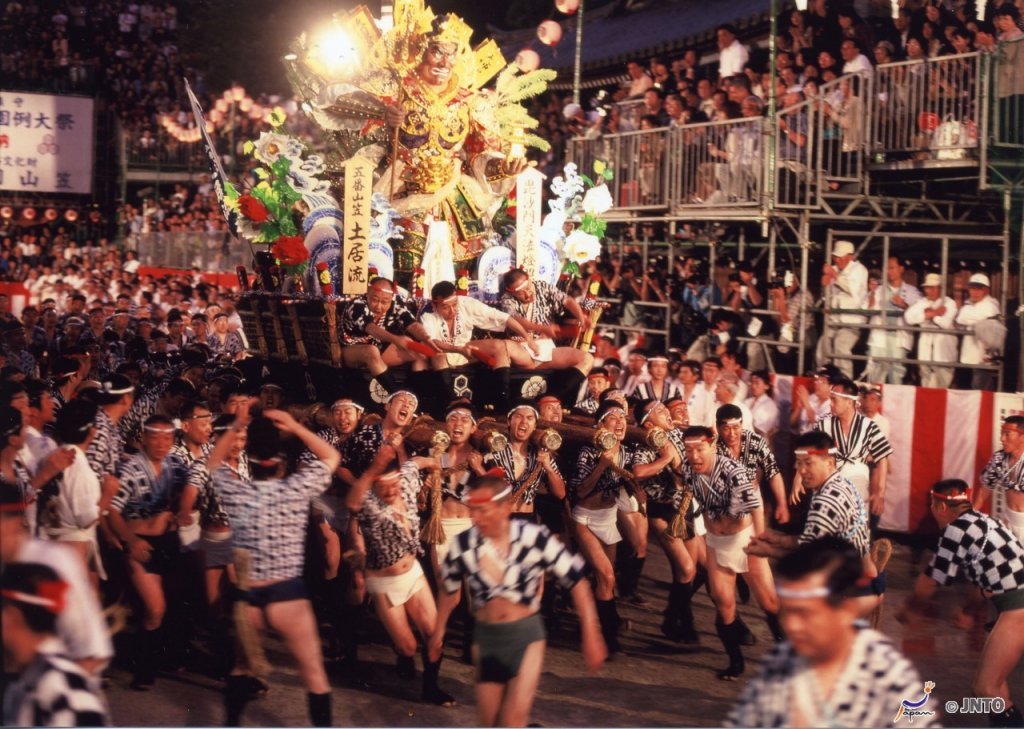 It is a favorite hanami site of both locals and tourists, as it grows numerous cherry trees that look incredible in full bloom, usually in the beginning of April. The already stunning pink flowers look even more magnificent at night, when the trees are illuminated. 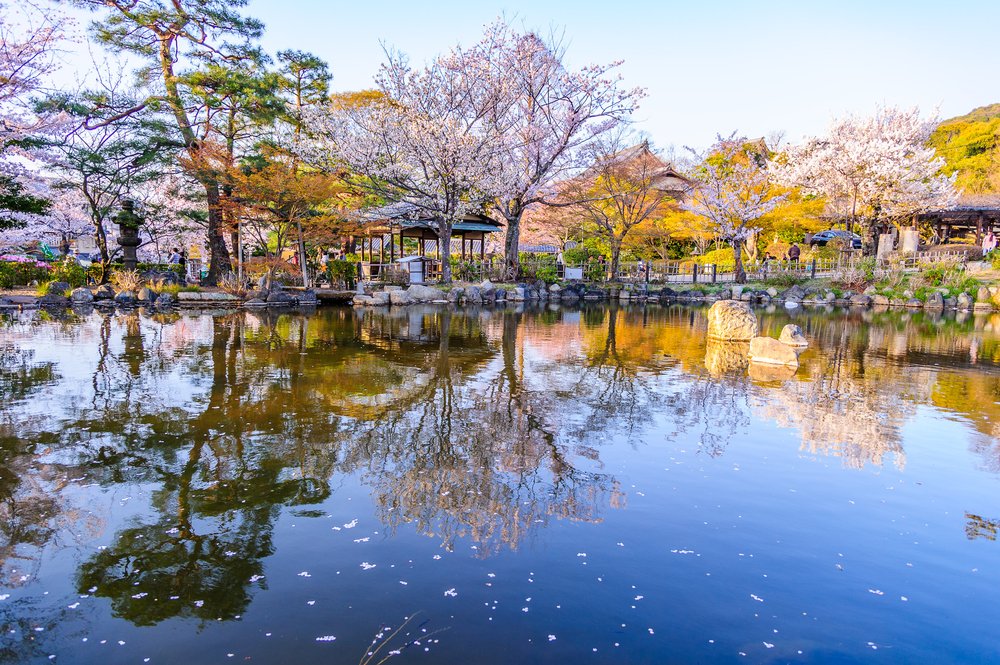 Dubbed as “Kyoto’s Kitchen,” Nishiki Market is a shopping and dining block that houses over a hundred restaurants and stores.

You can buy fresh seafood, vegetables, fruits, and other produce, as well as kitchen utensils and cookware, and Japanese sweets and snacks there. And, once you are hungry, you can sit down at any of its small restaurants and food stalls that serve a wide range of Japanese dishes.

The market is only about five minutes away on foot from Shijo Station, which is along the Karasuma Subway line, or Kawaramachi Station or Karasuma Station, along the Hankyu line. 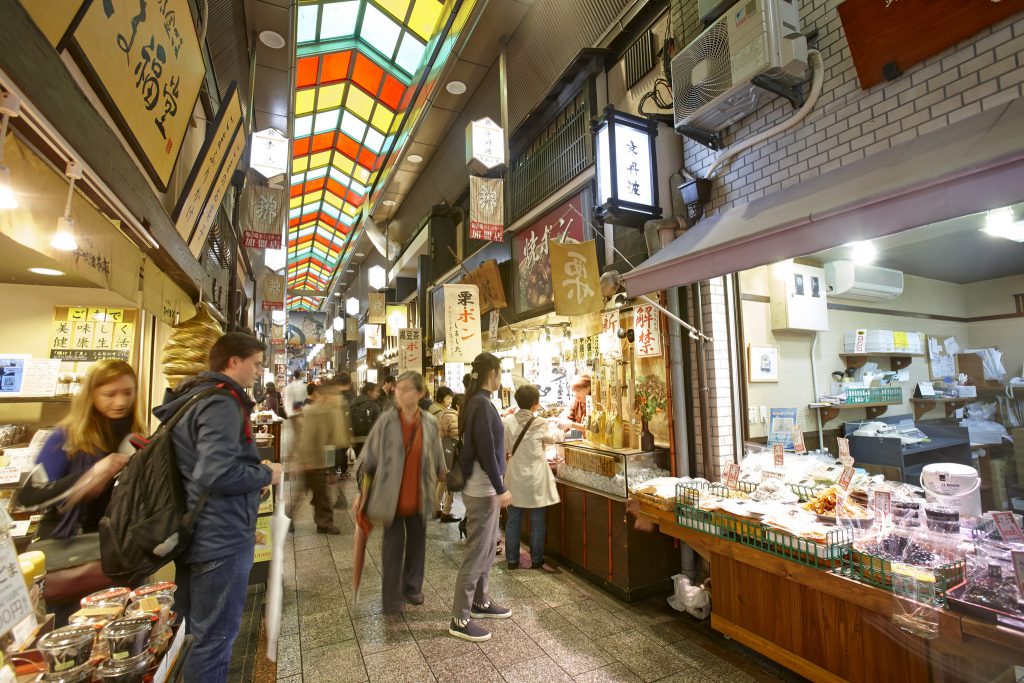