All year round, Japan welcomes several million tourists from all parts of the world. This should not come as a surprise as it offers some of the best historical and cultural spots, most fascinating modern-day attractions, and most unique adventures that you cannot find and experience anywhere else in the world.
In addition to its major tourist destinations, like Tokyo, Osaka, and Kyoto, Japan has countless of hidden gems that are highly recommended to anyone who wishes to try something different in this amazing country. Below are 10 destinations that you can include in your Japan trip itinerary for 2019 using your Japan Rail Pass:

Situated on the eastern side of the island of Hokkaido, the Akan Mashu National Park is a beautiful, well-preserved natural wonder popular for its three lakes — Lake Akan, Lake Kussharo, and Lake Mashu. It provides plenty of opportunities for hiking, bird watching, and other outdoor activities.

• Lake Akan – Lake Akan is a crater lake that is home to a rare species of algae known as marimo. It can be explored via sightseeing boats that depart from the lakeside town named Akankohan.
• Akankohan – Akankohan is an Ainu village where you can find souvenir shops that sell various kinds of Ainu handicraft products.
• Lake Kussharo – Lake Kussharo is the largest lake in the national park. It has hiking and cycling trails, and outdoor hot spring baths around it.
• Lake Mashu – Lake Mashu is one of the clearest lakes in the world. Along the rim of its caldera, there are three observation decks where visitors can enjoy great views of the breathtaking natural scenery.
• Kawayu Onsen – Kawayu Onsen sits between Lake Kussharo and Lake Masshu, and is known for its very acidic natural onsen waters. 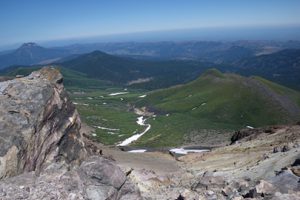 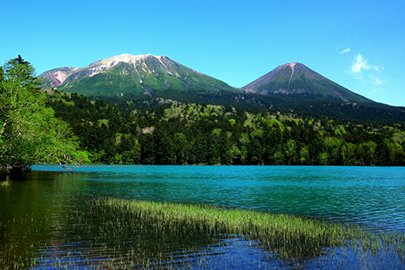 One of the most renowned onsen resorts in Japan, Beppu is a city in Kyushu sandwiched between the mountains and the sea. It has a wide selection of onsen baths — from steam baths and hot water baths to sand baths and mud baths.

• Jigoku – Jigoku, or “hells” in English, is composed of seven hot springs that create spectacular illusions of “hells” through their boiling ponds of natural hot spring waters.
• Beppu hot springs – There are eight hot springs in Beppu, and each is equipped with different kinds of bathing facilities and ryokan accommodations.
• Mount Tsurumi – Standing at 1,375 meters high, Mount Tsurumi provides views overlooking Beppu and its surroundings. It has a ropeway, walking trails, and observation decks. 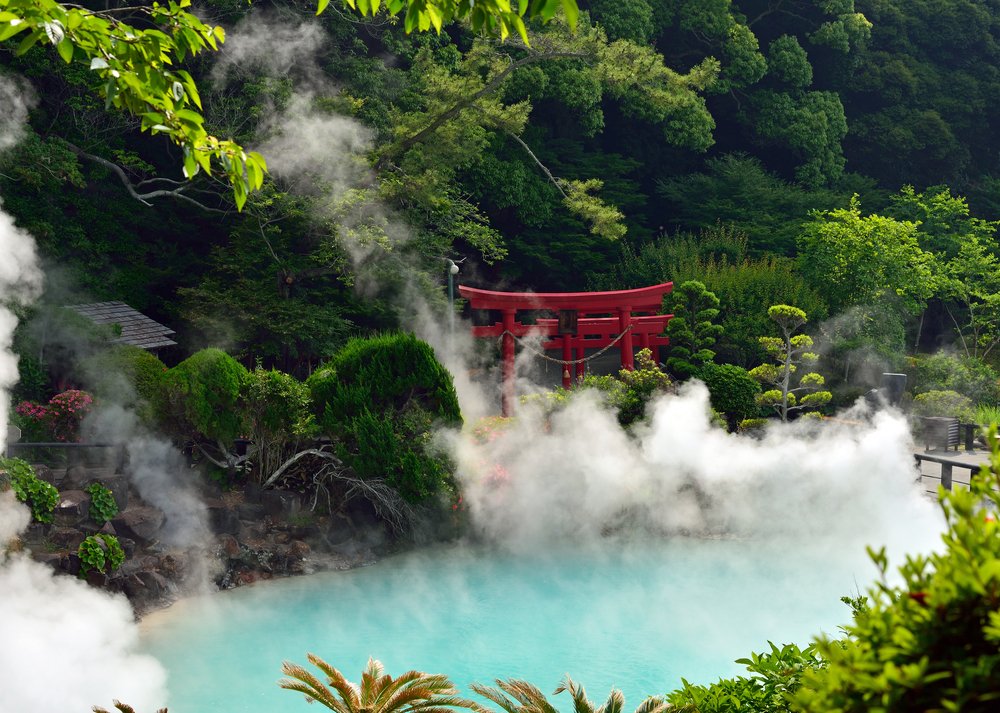 The biggest city on the island of Shikoku, Matsuyama is an old city with many ancient and historic landmarks, including eight of the 88 temples in the Shikoku Pilgrimage.

• Dogo Onsen – Dogo Onsen has been in existence for more a thousand years now. Its most famous attraction is the Dogo Onsen Honkan, a Meiji Period bathhouse with a wooden interior made up of labyrinths of corridors and stairways and is said to be an inspiration for Studio Ghibli’s film, Spirited Away.
• Matsuyama Castle – Matsuyama Castle was built in the early 17th century, and is one of the only 12 surviving original Japanese castles today. Its castle grounds are vast and a popular cherry blossom viewing spot.
• Ishiteji – Ishiteji is temple #51 of the 88 temples in the Shikoku Pilgrimage. Its gate, main hall, and pagoda are designated important national and cultural treasures. 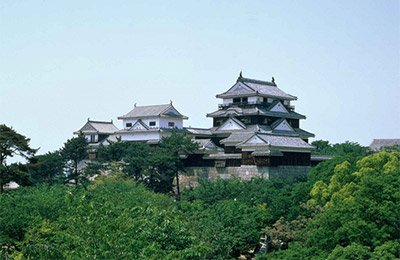 Situated by the sea, Atami is an ancient city with a reputation of being home to some of the best natural hot springs in the country since the 8th century. It also has several historical sites and museums. As it is only about a 1hr 45minute train ride from Tokyo, it is a good choice for an off-the-beaten-path day trip.

• Hot springs – The hot springs of Atami are highly regarded by many, including Edo period Shogun Tokugawa Ieyasu, who visited the city during his reign to experience the special therapeutic abilities of Atami’s onsen waters and took some back to Edo by boat.
• Atami Castle – Atami Castle was constructed in 1959 and serves as a museum featuring various displays and exhibits. It also has an observation point that affords scenic views of the city.
• Kiunkaku – Kiunkaku is an old building that operated as a ryokan back in the day. Today, its buildings and gardens are open to visitors for viewing only.

Found on the outskirts of two former Japan capitals, Kyoto and Nara, Uji is a small city with a history that goes back to more than two thousand years ago. The legendary Uji River, which is mentioned in the ancient Japanese literature Tale of Genji, runs through it, and is a favourite spot for fishing and other activities in the summer and autumn seasons.

• Tsuen Tea – Tsuen Tea is the world’s oldest tea house, built in 1160. It boasts of superior quality green tea that many illustrious figures in Japanese history have tried, including Toyotomi Hideyoshi and Tokugawa Ieyasu.
• Byodoin Temple – Byodoin was completed in 1052 during the Heian period. Its temple complex consists of a number of buildings, a pond, and a garden that grows sakura trees that produce magnificent flowers every peak cherry blossoms season.
• Ujigami Jinja – Ujigami Jinja is a UNESCO World Heritage Shinto shrine founded in 11th century. It is said to be Japan’s oldest original Shinto shrine.
• Mimurotoji – Mimurotoji is a 1,200-year-old temple with several gardens that grow different kinds of seasonal flowers, such as azalea in late spring, and hydrangea and lotuses in summer.
• Uji River – The Uji River is a popular fishing spot that runs through the city. Its waters come from Lake Biwa, Japan’s largest freshwater lake. 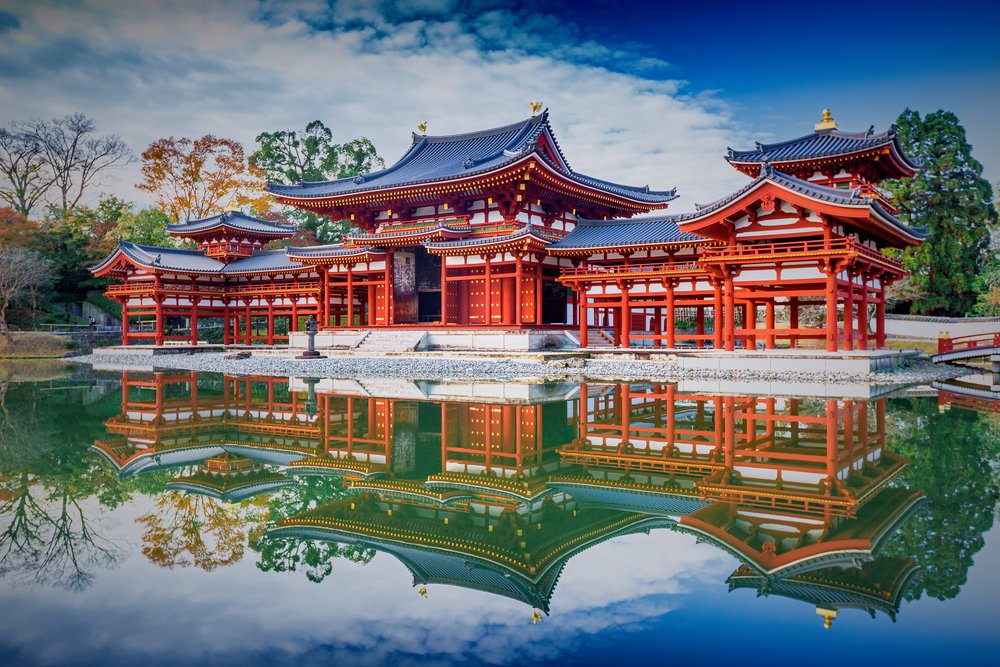 Home to Japan’s most sacred Shinto shrine, the Ise Grand Shrine, Ise is a city in the heart of Mie Prefecture. Much of its history is related to the Ise Grand Shrine. In fact, it was a busy and thriving destination for pilgrims during the Edo period.

Blessed with scenic beaches, relaxing hot springs, and picturesque landscapes, Izu is a peninsula on the Pacific coastline of Honshu island. It gets a lot of tourists all-year round, as it enjoys a mild climate that is perfect for nature sightseeing and outdoor adventures.

• Cape Irozaki – Cape Irozaki sits along the southernmost tip of Izu. It faces the Pacific Ocean, and is surrounded by some of the most fascinating rock formations in the world.
• Jogasaki Coast – Jogasaki Coast is a nature paradise in the eastern part of Izu. It has a hiking trail that runs 10 kilometers along the coastline, giving you unobstructed views of the clear waters and rugged landscape around.
• Dogashima – Dogashima is found in Izu’s western coastline. It has an abundance of picturesque caves and cliffs that are best enjoyed by joining a sightseeing boat tour.
• Shirahama Beach – Shirahama Beach is a famous summer destination in the region. It has rental facilities for various beach activities, shops and stores for food and souvenirs, and the Shirahama Jinja Shrine. 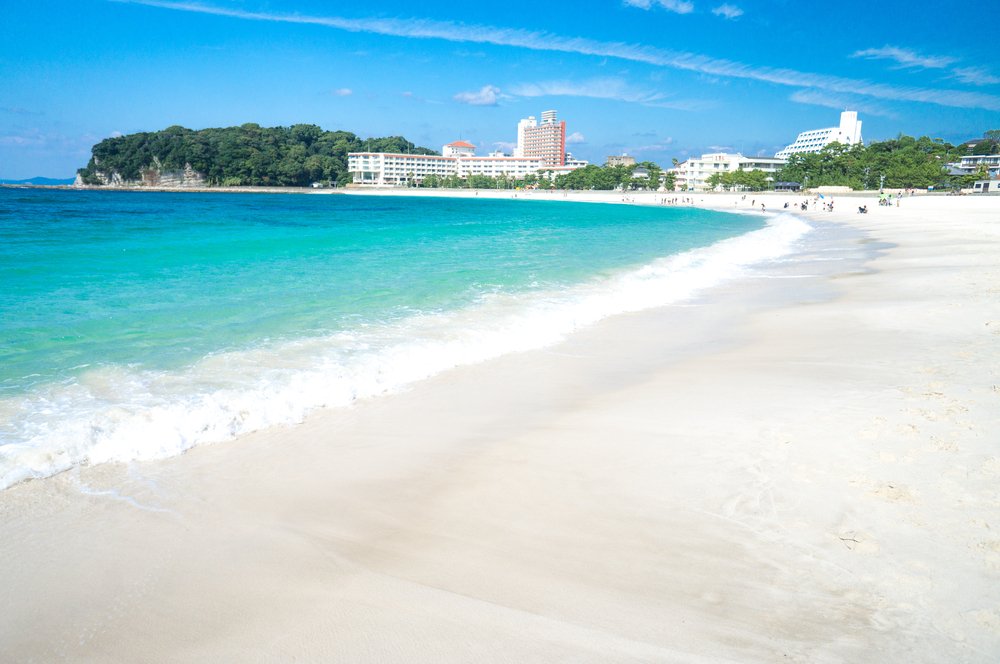 A quaint town in Shizuoka Prefecture, Kawazu is bordered by the Pacific Ocean, the Sagami Bay, and the Amagi Mountains. It is famous for its cherry blossom festival, which provides opportunities to enjoy sakura in full bloom earlier than the rest of the country.

• Kawazuzakura Matsuri – The Kawazuzakura Matsuri, or Kawazu Cherry Blossom Festival, is an annual event held around early February to early March. During this time, you can walk along the Kawazu River and see the magical Kawazu cherry tree flowers up close, and stop by a quick snack or two at the food shops and stalls lining the walking path.
• Kawazu Waterfalls – The Kawazu Waterfalls are a group of seven waterfalls tucked in the wooded mountains surrounding the town. Their heights vary from 2 meters to 30 meters. They are accessible via a kilometer-long walking trail through the lush forest.

Made up of about 260 small islands, Matsushima is a beautiful nature retreat in Miyagi Prefecture, only 30 minutes away from Sendai. Its bay and islets have consistently been in the top three of the most scenic views in Japan list.

• Matsushima Bay – Matsushima Bay is blessed with an abundance of natural beauty. Aboard a tourist sightseeing boat, you can take pleasure in some stunning views of the bay and the pine-covered islets.
• Oshima Island – Oshima Island is one of the most easily accessible Matsushima bay islands to tourists. It is covered in pine trees, and used to be a sacred place for monks to meditate. Today, it can be explored via walking trails that take you to a lovely tour of the spectacular flora and fauna found on the island.
• Fukuura Island – Fukuura Island is another pine-abundant island that is open to the public. To get there, you have to cross the 252-meter long bridge from the mainland. It has a botanical garden and many walking paths.

Bounded by mountains and the Sea of Japan, Yamagata is a prefecture in the southwestern portion of the Tohoku region. It consists of several natural parks that serve as home to a wide variety of wildlife. It also has a long list of attractions that tell the region’s rich history and culture.

• Zao Onsen – Zao Onsen is an onsen and ski resort that is most immaculate in the winter season when the trees are covered in snow and appear to look like some kind of snow monsters. Its skiing and snow facilities, such as lifts, ropeways, and skiing and snowboarding courses, typically open from around late November to early May; and its highly acidic, sulfuric onsen baths are accessible year-round.
• Yamadera – Yamadera is a serene town with a temple that can be accessed by climbing up a mountain. Founded in the 9th century, the temple complex consists of several buildings, halls, statues, and staircases that start from the base and extend up the mountainside.
• Ginzan Onsen – Ginzan Onsen is an old, traditional Japanese hot spring town with old, wooden houses and buildings, narrow pedestrian-only streets, and gas-lit sidewalks. It has a foot bath, two public baths, and many ryokan with their own bath facilities.
• Dewa Sanzan – Dewa Sanzan are the Haguro-san, the Gas-san, and the Yudono-san, which are the three sacred mountains of Dewa in Yamagata. They are home to shrines where monks and practitioners of the folk religion called Shugendo do their prayers and worship. Make sure to visit in the summer when all three are open, as the two of them close down in the winter due to dangerous conditions brought about by heavy snowfall. 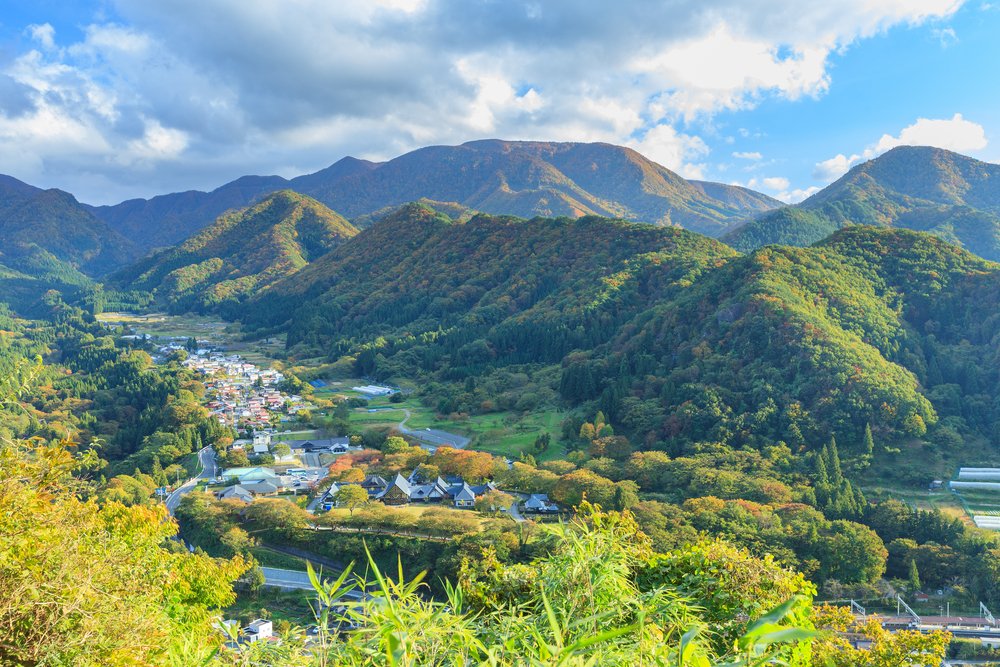