If visiting Japan in autumn, be sure to check out some of the country’s best spots for viewing the incredible autumn foliage. Below is a sample itinerary of the best Japanese autumn spots to visit if you have a 7-day Japan Rail Pass:

If arriving in Japan at Narita Airport, you can immediately exchange your Japan Rail Pass voucher at any of the JR Ticket Offices found at the airport terminals. You can activate it the same day to reserve a seat on the Narita Express, taking you to central Tokyo in less than an hour.

Once in Tokyo, you can choose to explore as many of the following popular autumn spots as your time permits:

There are also some highly recommended autumn foliage viewing spots that are just an hour or two’s travel from Tokyo by train, so why not take a daytrip to the following nearby cities: 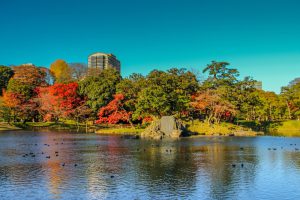 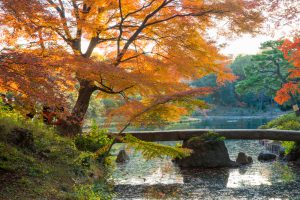 Karuizawa is a mountain resort which sits at the base of Mount Asama, an active volcano in Nagano Prefecture. At an altitude of about a thousand metres, it is an excellent destination for those who want to spend a cool and pleasant day or two during the hot and humid summer months. During autumn, it attracts flocks of tourists wanting to get the best views of the spectacular autumn foliage.

From Tokyo Station, the Shinkansen ride to Karuizawa Station takes about an hour and twenty minutes.

Next stop is Takayama, which is a city located in the mountainous region of Hida in Gifu Prefecture.

From Karuizawa Station, board a Shinkansen going to Toyama Station, and then transfer to the Ltd Exp (Wide View) Hida Line to Takayama Station. The entire trip takes a little less than four hours, and is covered by the JR Pass. 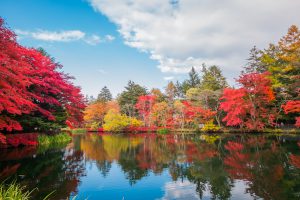 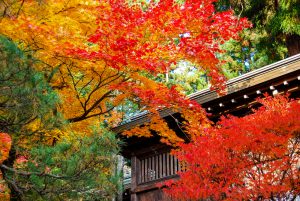 Here are the must-see spots in Takayama:

To return to Tokyo, from Takayama Station take the Ltd Exp (Wide View) Hida Line to Nagoya Station and then transfer to a Shinkansen headed to Tokyo. The whole journey takes about four and a half hours and is fully covered by your JR Pass.

Note: The timing of the appearance of the autumn foliage varies per region every year, so be sure to check the internet for autumn foliage forecasts and reports before your trip so you can plan accordingly.