Hiroshima is a large city on the island of Honshu that became renowned around the world for being the site where the first atomic bomb was dropped, during World War II. It was left in terrible condition, with the majority of the city being destroyed and several thousands of people losing their lives. The Genbaku Dome (A-Bomb Dome) was the only building left standing and still stands today.

Today, Hiroshima is one of the country’s most visited cities, welcoming several hundred thousand foreign tourists every year. 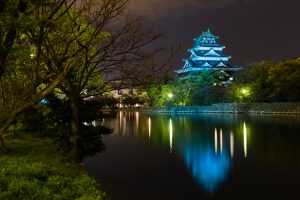 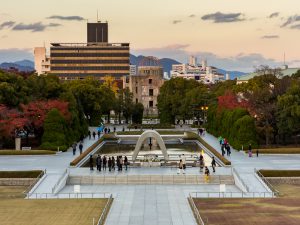 A prominent landmark of Hiroshima, the Peace Park covers a vast area, including the Peace Memorial Museum, the A-Bomb Dome (a world heritage site), Children’s Peace Monument with thousands of handmade paper cranes, landscaped gardens, and several other statues and monuments.

Check out the Shukkein Garden

The Shukkein Garden consists of numerous mini-gardens that depict mountains, valleys, rainforests and other landscapes. It is about four hundred years old now, and also includes a pond and some tea houses with fantastic views of the beautiful gardens.

Also known as the Carp Castle, the Hiroshima Castle is a five-storey fixture located in the city centre. It was constructed in 1589 and consists of a vast garden and a moat.

Hiroshima is where the headquarters of the Mazda Motor Corporation is located, and its economy is largely reliant on the automobile company. Visitors who want to learn how Mazda produces its cars should book a guided tour at the museum via email or phone (check the Mazda website for more details on how to make a reservation). The tour also offers a look at the history of Mazda, the different technologies it has developed through the years, and the many automobile models it has developed since it was founded in 1920.

A park just outside of the city centre. Around its ponds and paths are full of runners, walkers, families and visitors. A great park to take a stroll before visiting Hiroshima City Museum of Contemporary Art at the top of the park. 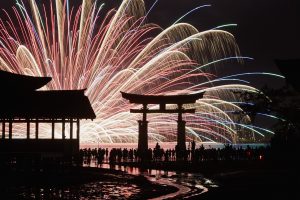 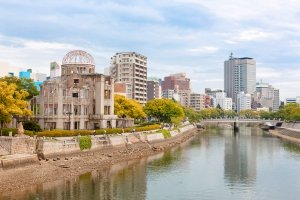 Hiroshima serves eight tram lines (the largest tram network in Japan), a JR tourist loop bus, and several local buses. Walking is also an option to see more of the city up close.