Finding a place to stay on your trip to Japan should not be that hard as it offers many different accommodation and lodging options for tourists. Wherever you are in the country (whether in some busy metropolis or a quiet rural town), you will be able to find a room in which to spend your nights, whether Japanese or Western style, that fits your budget. 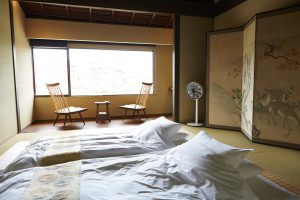 Many hotels in Japan feature Western style rooms and facilities. They are generally costlier than the other accommodation types, and are frequently found in the major cities around the country.

You can view hotels in each City here

Japanese guesthouses are usually operated by Japanese families, and they are a good accommodation option for tourists who want to experience some traditional Japanese hospitality. Also known as bed and breakfasts, or minshuku, they are often found in tourist towns known for their ski resorts and hot springs or onsen.

In onsen towns, ryokan are a common type of accommodation available for travellers. They feature traditional Japanese-themed lodging, with futon beds, tatami floors, baths, and food.

Backpacker hostels are known to offer the lowest rates among the many accommodation options found in Japan. In addition to being budget-friendly, they offer a chance for travellers to meet and interact with their other fellow adventurers and make new friends.

Capsule hotels are called such because they have capsule-like rooms for guests, providing just enough space for an individual. They are popular among travellers who are looking for accommodation for only one or two nights.

Manga cafes are open 24 hours, so if you stay out late and miss the last train, you just need to search for one close to a major train station and spend your time there until morning. They generally offer two kinds of seats, an open booth (a desk with a computer and chair) and a private, partitioned cubicle with a desk, a computer, and a reclining chair or futon.

Spending a night or two at a temple is a must-do for any foreigner visiting Japan. In various Japanese cities, such as Koyasan, Nagano, Dewa Sanzan, Mount Mitake, and Kyoto, there are a number of Buddhist temples that offer lodgings, also known as shukubo, to visitors going on a pilgrimage or touring the area. 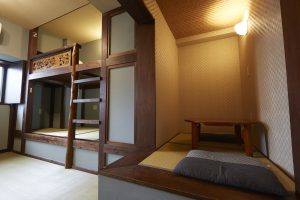 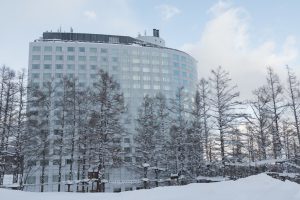 The easiest way to book accommodation in Japan is online through websites such as Hostelworld, Japanican, Agoda, Booking.com, and JapaneseGuestHouses.com.

By using these booking and reservation sites, you will be able to find a wide variety of options for lodgings, factoring in your budget, preferred vicinity, room type, and other things. Oftentimes, you may be able to snag discounted rates and promotions, especially if you book early or reserve dates during off-peak seasons.

Alternatively, you can search for the accommodation’s official websites and make a booking there. Sometimes, booking directly with the hotel can be less of a hassle and may be even cheaper.

There are two common ways to pay for accommodation:

Usually, when booking online, you will need a valid credit card to complete the transaction, and the full amount of your stay is immediately charged to your card. But, there are times when your credit card is only used as a guarantee, no charge is made, and you just pay the hotel the full amount directly when you get to Japan.

Other times, particularly when you directly book with the hotel, you just have to provide them your personal and travel information and they will hold your reservation. You need only pay them in full once you arrive on your check-in date.