Located in the mountainous region of Hida in the Gifu Prefecture, Takayama (also frequently called Hida-Takayama), is a town that is known for its traditional Japanese atmosphere. Its old Japanese houses have been well-preserved, and its rural lifestyle is primarily kept intact, even with the changing of times. 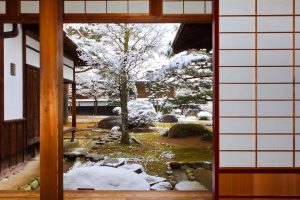 Room with the Garden View 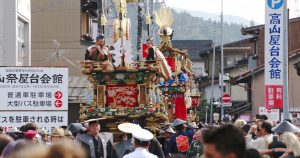 Considered to be one of the top three best Japanese festivals (the other two are Chichibu Yomatsuri and Gion Matsuri), Takayama Festival is an event observed in the city twice a year — in autumn and in spring.

In autumn, the festival is celebrated on 9-10 October at the Hachiman Shrine, while the spring event is held on 14-15 April at the Hie Shrine.

During the festivities, several floats are displayed all over the town. A Karakuri show (which is a performance of mechanical dolls that dance and move) and a mikoshi procession (an event where a portable shrine is paraded around the city at the beginning and conclusion of the feast to honour the Shinto deity) are also held.

Check out the morning markets

There are two morning markets that open in Takayama every day. The first one is the Jinya-mae Market, which starts at 6:30 in the morning, operates until noon and is located near the Takayama Jinya. The second is the Miyagawa Market, found in the city’s old town district. Both sell fresh farm produce, local arts and crafts, and snacks.

The walk along the Higashiyama trail takes visitors through the city’s temple town, suburbs, forest, hill, and Takayama Castle’s former site. It covers a total distance of about 3.5 kilometres and takes about one to two hours to complete.

Visit the Matsuri no Mori

Translated as “Festival Forest”, the Matsuri no Mori is a museum dedicated to exhibits that show Takayama’s traditions and customs. It houses life-sized replicas of floats that are similar to those you see during the Takayama Festival, large taiko drums, and other artifacts.

The Takayama Jinya used to be the location of the office of the Tokugawa Shogunate officials in the region. Today, the complex is a museum that features traditional Japanese interior — tatami floors, sliding doors, etc. It is made up of several conference rooms, offices, and guest rooms.

Go on a side trip from Takayama

Check out Shirakawa-go – A UNESCO world heritage site famous for traditional gassho-zukuri farmhouses, some that are over 250 years old.

Day trip to the Shinhotaka Ropeway

About a two-hour bus ride from Takayama, the Shinhotaka Ropeway offers an exciting experience and an exhilarating ride up the Hotake Mountain Range. Passengers are taken up more than 1,000 metres in double decker gondola cars to the upper station where they can dine, shop, and take in the spectacular natural scenery of the Okuhida Region and its surroundings. 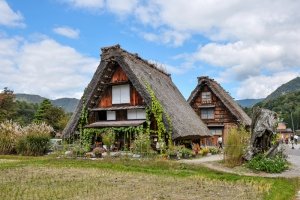 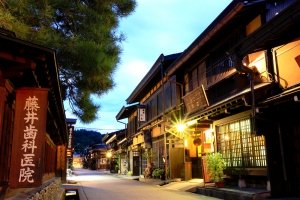 There are two tourist buses that operate in Takayama — the Sarubobo Bus and the Machinami Bus. Because most of the city’s landmarks and attractions are situated adjacent to each other, walking is also a popular means of getting around.